A Portfolio of Custom Designed Graphics

Following is my graphics portfolio with images made in Adobe Fireworks and Affinity Designer. Fireworks has been discontinued by Adobe Photoshop so it won't work on the newer MAC OS starting with Mojave, so I finally found a program to replace it in Affinity Designer.

Some of these images were custom designed graphics requested by my clients and the rest were designed for my own web pages. Click the images or links to see them used on the original pages.

This is an image I made for Pinterest advertising my SEO Analysis service. The image of the computer was lengthened so I could add text on top with same background color added.

This graphic was designed for the Shopping Cart SEO page. I distorted the image of a shopping cart so it wasn't horizontal and made the background transparent. Then put the word "SEO" in a large font and distorted that also so it was on the same plane as the shopping cart. 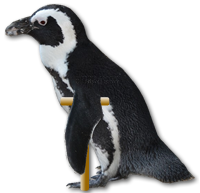 The background and wing was removed from this Penguin image with the lasso tool. A wooden crutch was designed and placed under the wing to symbolize a penguin recovering from an injured leg for an article I wrote on recovering from a Google Penguin penalty. The Penguin algorithm has since been incorporated into Google's Core Updates.. 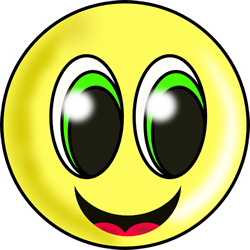 This 3-D Smiley Face was made in Affinity Designer which involved the use of layers, shading, and highlighting.

This star was produced with the star tool in Fireworks with a drop shadow added under the star and text applied on top. It is often used for 4th of July Sales. 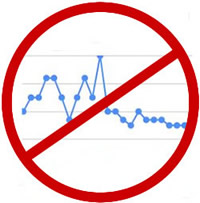 This circle with a slash across it was designed to symbolize preventing a drop in traffic on a website. The SEO Audit page analyzes such drops.

"Don't Do This" Images

The trash can was designed using an image of a trashcan. The lid was removed with the eraser tool and another image of a piece of paper tilted at the same angle over the trash can image.

This is an image of 3 stars on a transparent background with a drop shadow under the stars, made in Fireworks. It has been placed in a div with a blue background and can be used for 4th of July special sale notices. A drop shadow was added to the image using CSS.

This image of a US flag has a semi-transparent image with rounded corners overlaying it with a drop shadow with CSS applied to both the flag and the transparent image. Text is printed on top.

This hourglass, designed for a member of my Endtime Poetry site, was made in Fireworks and assembled in several stages. The base and top were designed separately, then one globe was drawn and copied and the other globe was placed above it upside down. The globes were attached together. Sand was added (using a colorful fill) and empty spots filled with rubber stamp tool. Then the base and top of hourglass were copied and pasted onto the globes covering the bottom and top. Bars were placed along the sides. And finally the whole image was tilted.

This Jewish Star of David, designed for a member of Endtime Poetry, was used to depict Messianic Judaism. It was made in Fireworks using straight lines in the shape of a triangle and then copying it and inverting to make the 6 sided Jewish star of David and filling the whole thing with blue color. The Christian cross was made the same way except filled with a wood grain pattern.

This scroll was designed as a symbol of a story teller. The basic outline of the left edge was drawn with a pencil in Fireworks and copied and the copy moved to right. Then interconnecting lines were drawn between the two sides and excess lines erased. Then the pen tool was used to outline separate parts in a darker color to be filled with the paint bucket tool using vector graphics. A gradient of darker colors was added on the ends making it appear as shadows under the rolls. The letters were added and transformed with the "skew" tool making the right edge of letters appear farther away to provide a distance perspective.

This is a 3-D box with a daisy applied to the corner and then 1/2 of the daisy distorted so it looks like it was bent around the corner of the box. 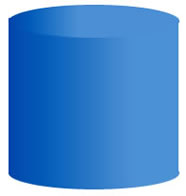 This is a cylinder with a gradient fill applied so that it has a 3D effect.

This image is a semi-transparent arrow designed to go over video thumbnails. This image was designed in Fireworks with a gradient fill on the arrow. It is set to go on a white background.

This is a circle with highlights so it looks like a 3D sphere with a drop shadow underneath.